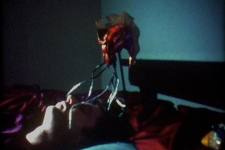 This was the major final deliverable for the subject ‘Film/Video 1’, part of my Masters degree.

Instructions were to develop an original film and sound project using a Bolex 16mm camera and sound recorder.

The Zauron marquette I used to create a stop-motion animation scene was created for another subject 'Graphic Visualisation'. This footage was combined with pieces of found footage, alongside scratched film and Flash animated text. The audio was a combination of self-recorded, internet and catalogue-sourced material.