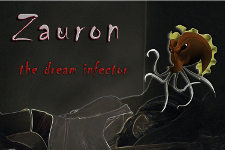 This was the major deliverable for the subject ‘Graphic Visualisation’ which formed part of my Masters degree. Instructions were to conceptualise and evolve an original monster character.

The character was evolved through sketches and expression sheets, a concept design poster, building a model/marquette, an animated storyboard of a movie concept trailer.